How I set up my Moonlander

The Moonlander is an excellent keyboard if you have a permanent work station. I wouldn’t recommend taking it out every day even though it comes with a travel case for you to move it around. Why? Because it takes some time to get the optimal tilt/tent position for your hands. (I’ll talk about how in a bit).

The split keyboard is really nice. I can feel my arms and shoulders relaxing as I use the keyboard so that’s a good thing.

Another good thing is the Moonlander is very customisable. You can create ultra-flexible keyboard shortcuts, control the mouse, and even control the operating system (to a limited extend). It can make life much easier for you if you spend long hours on the keyboard.

The only downside is the keyboard doesn’t have space for the arrow keys. So I had to relegate the arrow keys to another layer. This takes some effort to get used to.

Overall, the Moonlander is a good buy. It just takes some time to get used to.

Setting up the Moonlander

Ideally, you’d want to place the moonlander shoulder-width apart so your shoulders can remain as relaxed as possible.

You can also choose to put the Moonlander further apart to expand your shoulders initially to create a stretch. But I highly recommend shoulder-width apart for long term usage.

Our hands tilt at an angle naturally. You can find this angle by relaxing your hands on the table, then raise your hands slightly off it. This angle will be the correct tilt you want to emulate on the Moonlander.

As you can see from the pictures above, I don’t tilt my hands much, so I set up my Moonlander with a tiny tilt.

Ben Vallack has created a video on adjusting this tilt if you need help with it.

The thumb cluster refers to this big red button and three long buttons on the keyboard.

ZSA recommends people with small hands to tilt the thumb cluster up. But I disagree with this recommendation because it destabilizes the keyboard.

Instead, I recommend setting the tilt according to your hands (like what I showed you above). Once you do that, let the thumb cluster rest naturally and lock its angle there.

ZSA allows you to configure the Moonlander through a software called Oryx. You can find the configuration link here.

The Moonlander contains up to 4 layers, affectionately called layers 0, 1, 2, and 3. You can name each layer to your preference. Here are my layers.

There are lots of customizations here. I want to share why I configured the keyboard like this so it helps you plan how to configure your keyboard when you get one.

Layer 0: The Base Keyboard

It goes without saying that your base keyboard needs to contain keys for typing. If you are like most people, sticking with the default QWERTY keyboard is good enough.

What’s tricky about the base keyboard are the following keys:

We hit the space key often when we type. So the location of space should be below the thumb. This allows us to use the key without moving the hands as much. In my case, my hands rest on the command location naturally.

So I set the space key on the same location as the command key with a dual-function key. This essentially means I’d activate space when I tap the key and I’d activate command if I hold the key down.

I placed Space on the left side because I predominantly press space only with my left hand. I only use space occasionally with the right hand.

You may also have noticed I added another space key as the third key in the left thumb cluster. I do this because lots of my keyboard shortcuts use Command and Space at the same time.

Normal keyboards have a dedicated Enter key that’s located two keys away from the L key. The Moonlander only has two keys after L. So it’s impossible to let Enter be on the same location on the right side.

I chose to put the Enter key on the right command key (with a dual-function key) since I need to access Enter often. The additional benefit here is I don’t have to move my hands at all to reach the enter key. This means my hands are always in the optimal position for touch-typing.

You may also notice I added another Enter key at the bottom right corner as well. This is a redundant key that I don’t use often. There’s also an extra space key at the right-alt position just in case I want to use the space with my right hand.

The backspace key is located two keys away from zero on a normal keyboard. In this case, we only have one after zero, which is a serious problem. This means both symbols and backspace need to be located elsewhere.

The closest and most comfortable place for me is the top piano key in the right thumb cluster. So I added backspace there.

Arrow keys are the hardest keys to map to the Moonlander in my opinion. We’re used to arrow keys being easily available – we can move our right hand to reach it easily.

Unfortunately, this movement is impossible because the Moonlander requires most of the space for normal keyboard operation. If you’re using QWERTY, you may opt to sacrifice the / key for arrow movements.

Unfortunately, I can’t do this because has a Z key in the / location. After much deliberation, I chose to put the arrow keys on a second layer. I then access this layer by changing the keyboards.

The Moonlander provides three real-estate spaces for symbol keys. I highlighted them in this picture below.

I’m going to refrain from talking about symbol keys much because Dvorak and Qwerty symbol keys are very different. I’d have a hard time explaining why I use [ and ] on the right to someone who doesn’t use Dvorak.

I discovered later that it was easy to trigger these keys accidentally when I tried to pressed keys on the first or second row. It changed my entire keyboard and messes up the typing.

If you use these keys for layer change, make sure it doesn’t switch the keyboard permanently. Use something that switches back to the base keyboard when you lift off your finger.

For me, I moved the layer change keys into the thumb cluster which I don’t use much. It’s convenient because I can dedicate these three keys to layer-switching across all my keyboards.

Since I normally access arrow keys with my right hand, I chose to put these keys in a place where don’t have to shift my right hand to access them.

All I need to do is press down on a layer-change key on my left thumb cluster.

This is probably the most complex part of all. I realize I use both my hands to press down on shift, command, and option (depending on what I’m trying to do) to select text when I type. For example:

To combat these erratic movements, I added Command, Option, and Shift keys to various parts of the keyboard.

The left side is self-explanatory. The right side looks weird – I had to put the Command and Option keys on different lines to minimize unnecessary stretching of my hands.

The great thing about Moonlander is it lets you control the mouse with your keyboard. This means I rarely have to use my mouse for anything at all.

I chose to put the Mouse keys on my left hand so I have access to them easily. If I need the mouse on the right… I can use my actual mouse.

There are three things in this layer:

The Numpad is not necessary for daily operations since I don’t write numbers as much. But it is still important once in a while. I think it’s important because the number keys feel really far out of reach for me on this keyboard. (I think I have small hands?).

I don’t want to move my hands as much as possible (I’m lazy). So I create a Numpad I can use to make calculations or write numbers with.

Function keys are not needed most of the time, so I placed them in this layer instead of the Nav layer. This allows me to continue using the number keys even if I accidentally held down the layer switch button on my left thumb cluster. (Which happened frequently when I was getting used to the keyboard).

By software keys, I’m talking about keys that change volume and brightness. The volume change button is quite important for adjusting music volume 😃.

When you set a key, you can include any number of modifiers for the key. This lets you create a dedicated key for keyboard shortcut.

For example, I created a dedicated key to fill up passwords by pressing Ctrl + Opt + Command + / at the same time. 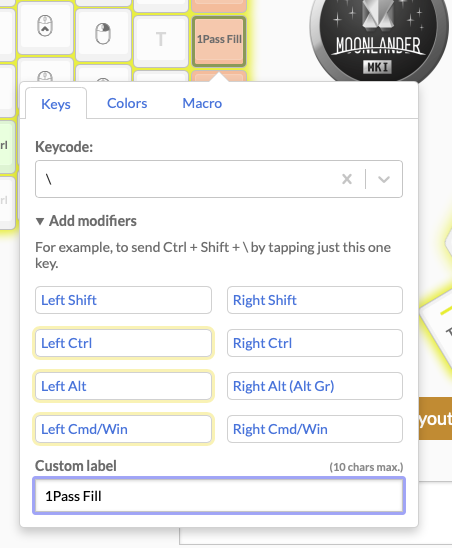 Another example: I added a shortcut to show my desktop with Command + F3.

Note: You can only do this after setting a keyboard shortcut in the Keyboard panel.

Macros are keys that are pressed in quick succession. We are allowed to press up to 4 keys (regardless of modifier count per key).

My best example is a shortcut I use for switching Window positions with Moom. Here, I press the following keys:

This 4-key combination can be executed via a single key with Moonlander’s macros. 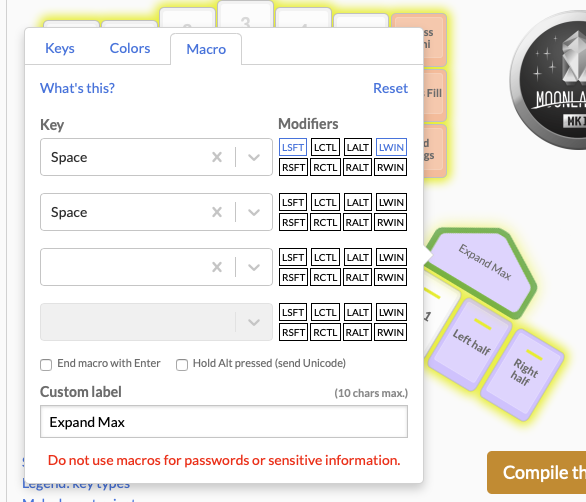 I love it since it makes window-positioning effortless!

Note: If you have a Setapp subscription, you can use Mosiac to do the same thing.

There really isn’t a right or wrong answer to keyboard customisation. What matters is it works for you. So go ahead and experiment with different key combinations until you find one that you’re comfortable with.

I’m still working on my keyboard layouts. You can find the latest version here.

By the way, we can also apply this experience to programming and to life as well.

To programming: There are no right/wrong answers to choose languagues or framework or even coding styles. You are free to experiment with different styles to find one you love.

To life: Again, there are no right/wrong answers to life. So why not go out and experiment with different things until you find a combination that you love?

I hope this article helps you configure your keyboard layout! I’m always curious about how others configure their layouts, so let me know how you configured yours! 😄.