CSS Positions allow you to manipulate how elements are positioned to achieve many different visual effects. In this post today, we’re going a little deeper to understand CSS positioning.

CSS Position allows up to 5 different values. But essentially only 4 values are commonly used.

All positions are static by default. Meaning they take up the appropriate amount of space they are supposed to take up. Its the default positioning value and every element will use this value, unless otherwise stated.

Position relative allows you to do two different things

When set to position relative, elements take up the same amount of space at the same exact position it was supposed to take as if its position was static.

It can however, appear to be pushed to a different location visually. 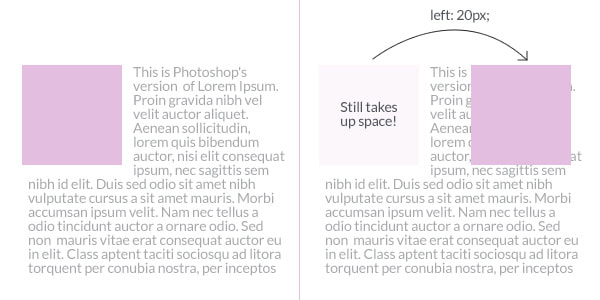 Position absolute takes the document out of the document flow. This means that it no longer takes up any space like what static and relative does.

When position absolute is used on an element, it is positioned absolutely with reference to the closest parent that has a position relative value.

If there are no parent elements that has a relative position, then the absolutely positioned element will take its reference from the browser window.

Similar to position absolute, an element that has fixed position is taken out of the document flow. The major difference is: elements with position fixed is always positioned relative to the browser window.

Other Attributes available for positioning

Once an element is set to position relative, absolute or fixed, some other positioning attributes become available.