Configuring Gulp to use LibSass with Susy

In case you never heard of Gulp, it is another Javascript task runner that helps you automate your development workflow. It was created slightly later than Grunt and aims to resolve issues that Grunt has.

This article assumes that you have Node JS, Bower and Gulp JS installed. You can find the instructions to install these tools from the following links if you don’t have them installed already.

Once you have the tools installed, open up a new folder and let’s begin to setup your project.

Setting Up The Project

Since we are using Gulp and Bower in this project, we can set the project up to easily add or manage both node and bower dependencies for the project.

To do so, we require the package.json and bower.json files.

These two files combined will allow you to easily add or manage dependencies in your project. Your folder structure should now be:

We can proceed on to install the gulp packages we need to run LibSass with Susy.

We have to install the gulp package to run Gulp in a project. Let’s begin by installing that.

Next, we need to install the gulp-sass package in order to use LibSass to compile Sass into CSS.

Since we’re compiling Sass into CSS, we should also include a source map for debugging purposes. You have to install the gulp-sourcemaps package in order to use sourcemaps with Gulp.

Your project structure should now be:

We now have the necessary packages to compile Sass into CSS with LibSass. Let’s move on to installing our front-end dependencies with Bower.

The only bower package we need to install in this article is Susy.

Your folder structure should now be:

Remember to add your HTML, SCSS and CSS folders into the project. 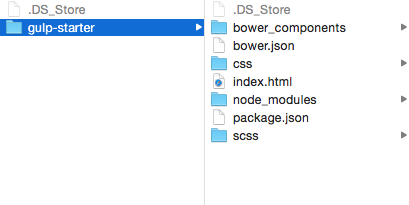 We have to import Susy into the stylesheets to use it. This is how you import Susy if you have the same folder structure as the picture above.

If you do install breakpoint-sass, you’ll have to import it in your stylesheets as well.

Now we have all the necessary libraries for this setup to work properly. Let’s proceed with writing the Gulpfile – the heart of the process.

We begin writing the Gulpfile by creating the a gulpfile.js and add that into your the project.

You start off by requiring all the packages that are installed.

Next, we have to create a task for Gulp to run. The basic syntax for a task is:

Let’s create the sass task so we can compile Sass into CSS.

This is the basic sass task. We can enhance it by adding sourcemaps like we mentioned above. We need to add two lines of code to the sass task.

The one tiny irritating thing about Gulp is that it stops the terminal from running whenever you have any errors in your code, and that really disrupts the workflow.

We can resolve that by adding a errLogToConsole: true option to the sass task.

We also want to watch the scss folder for any changes and run the sass task again as necessary. We have to create the watch task in Gulp to do so.

Finally, we need to define a task to run both sass and watch so the Sass is compiled to CSS when the task is run and Gulp will continue watching the scss folders for any further changes.

We created a default task in the above step that can be run with the command gulp default.

Once the command is given, Gulp should run Sass and begin to watch for changes.

Once you save any Sass or Scss files within the scss directory, Gulp will compile the new updates and keep watching the directory.

Here’s a github repo for the LibSass compiler we just built: https://github.com/zellwk/gulp-susy-starter.

We built a basic Gulp setup that allows you to use LibSass with Susy in this short article. Once you get this running, feel free to add more packages to make this starter more robust. Things that come to mind straight away are livereload, autoprefixer and even CSS and JS minification!

Whatever you do, have fun with the process and feel free to let me know if you have any questions via the comments!